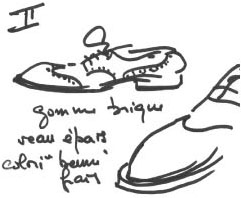 « It's that way of taking aim and shooting fast and sharp that I call style. »


Despite its English-sounding name, J.M Weston embodies a very French – and more precisely, very Parisian – form of elegance, in which timeless style is given a bold twist with contemporary influences.

The great classics are injected with the freshness of a rather nonchalant rock ‘n’ roll aristocracy, rich and raw materials rub shoulders, calfskin suede goes hand in hand with box leather, cashmere is found alongside denim, and the medallion wing-tip derby echoes the loafer: it is all a question of balance. Decipher codes, confuse the issue with precision and lightness ; this is the art of the French style. Master the opposites, new associations, different eras. Inspire spirit and charm to a classic style with rigour and idealism, realism and impertinence. The iconic loafer reflects this subtle combination which is used by Michel Perry, Artistic Director, for its creations.

A style is settled down through models which travel through time. 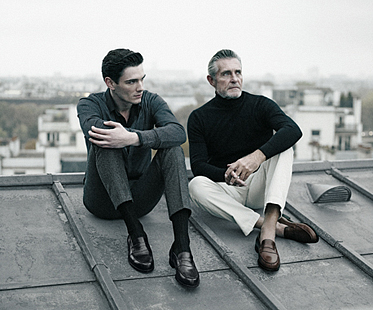 
A cultural reference, symbol of the “Drugstore Gang” generation, and firmly established in the French heritage.

A true icon, the moccasin is an integral part of J.M. Weston’s history. Made in Limoges, available in seven widths per half size, its crafting has remained unchanged since 1946. It is a model that can be reinterpreted indefinitely, to meet the needs and desires of each new generation. 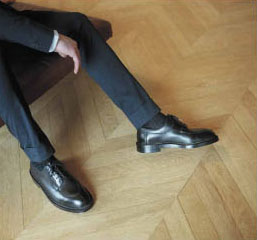 the artisans in the chasse workshop carefully repeat the movements inherited from the “Norwegian stitch” tradition. A model demonstrating the House’s desire to preserve a traditional know-how that has become exceptional. Even though it has an outdoor spirit, reaching back to its creation, it seamlessly integrates into an urban and contemporary world. 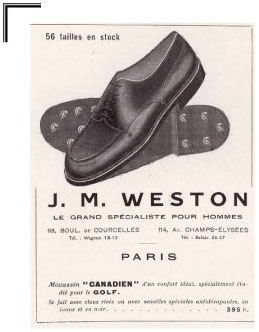 In the early years of the last century, they were sported everywhere by elegant golfers, clubs in hand, on the high-class greens of Europe from Saint-Cloud to Chiberta, via London or Evian.

The «Golf» derby is aptly named.Aubrey and Percy Boomer, the legendary golfing brothers,   naturally ordered their shoes from J.M. Weston. They even had their own model, «The Percy Boomer», a shoe designed to their specifications, with a special anti-slip sole, produced in yellow and white, or black and white. Ever since this time, the Golf derby has become an almost mythical shoe at J.M. Weston, one of its founding myths. 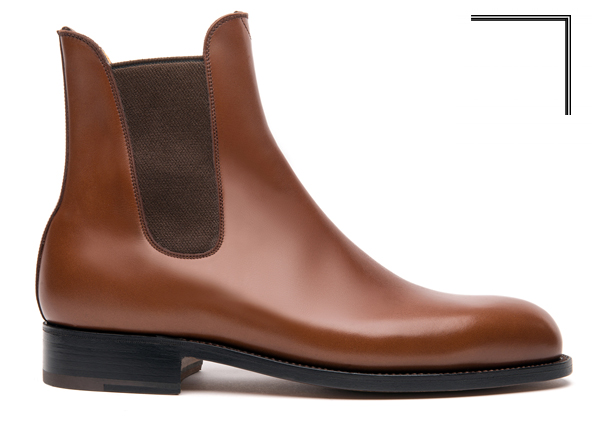 lthough inspired by the world of equitation, the elastic-sided ankle boot has a very urban look.

A model whose sobriety is its strength, featuring streamlined curves and pure lines. Seemingly simple, it conceals unique know-how: its arch is shaped on a last and it is crafted from a single piece of leather.

« We never change history, we just re-write it… »


It is in this that the timeless elegance fits into. Iconic models travel through time and evolve with the look of nowadays men. The group « J.M. Weston invites » who gives its own interpretation of the J.M. Weston style is the illustration of it.

Craftspeople, Artists, architects, writers, A very stylish elegant person, great thinkers, close cousins, and others more distant, In a word, great friends. Like an open invitation, “J.M. Weston invites…” offers itself up to new points of view, to new looks, to the poetry of meetings. Some invitations are embodied in unique collections, while others lead to cultural projects to unclassifiable works. Each invitation observes one single rule: symbolise a facet of this J.M. Weston “spirit” that characterises us. With this in mind, in 2011 it invited Kitsuné, Didier Van Cauwelaert, André, Cédric Klapisch in 2013 and Charlie Casely-Hayford in 2014.